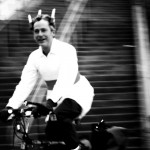 Timo Forsberg knows that no book could live up to the caliber of movies Filmed By Bike receives each year.

“I am especially happy not to have to hear anyone say ‘The book was much better then the movie.'”

Timo has been to every single Filmed by Bike, so he feels well prepared for the rigors of watching several hours of bike movies and believes his poor memory of past films will give him an absolutely fresh perspective for the 2011 festival.

Besides being a Filmed By Bike enthusiast, Timo contributes in a big way to the Portland bike culture as a board member of the School and Community Reuse Action Program, working with the Multnomah County Bike Fair and as a member of the Trash Mountain Boys bike/rock combo. Timo also enjoys contributing to Breakfast on the Bridges, a monthly event to serve coffee and pastries to morning bike commuters on several Portland bridges. Show up on the last Friday of the month to run elbows with this esteemed jury member. In his spare time, Timo works a full time job for the City of Portland’s Transportation Options Program.