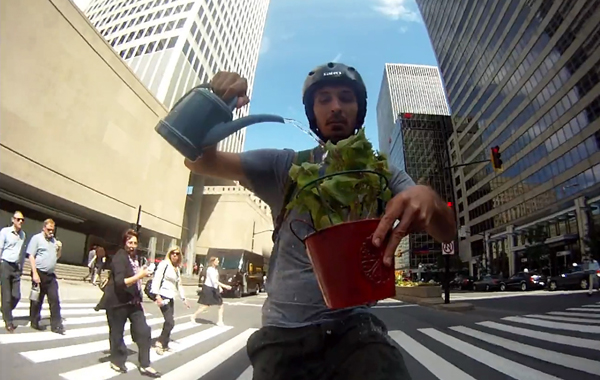 Guillaume Blanchet left France ten years ago to settle in Montreal, leaving behind friends and volumes of tender memories.

So it was decided that every year they would meet at some destination in the world. Guillaume was in charge of filming which grew his passion for filmmaking. Some scenes from trips were not traditionally filmed so in order to round out story lines Guillaume would use creative film techniques like stop motion and play mobile to recreate events not typically caught on camera. The projects led to more projects until Blanchet had forty films and a cache of festivals under his belt, including winning awards in Bike Reel Film Fest, NDG Off The Wall, Boston Bike Film Festival and the Francophone Film Fest.

Guillaume’s current submission to Filmed by Bike was inspired by his father who traveled almost consistently with and by his bike, “He called me once from Romania and told me about his trip…I said dad you really do live on your bike. Hence the title.”  In The Man Who Lived On His Bicycle we see a man literally cook, sleep and bath via bike. When asked if there is anything else he would like to do in film,Guillaume replies, “Shoot a project with Lionel Messi.”

To view a couple of Guillaume Blanchet’s films visit: