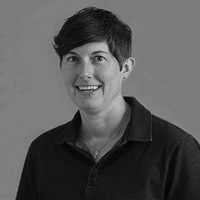 Courtney believes that well made films reveal something essential about the human condition and what it’s like to be a little person spinning around on this planet.

Though Courtney says she really loves being a teacher, she has plenty of interests outside of work, including hiking, biking, car touring, camping, coaching youth soccer and following college and professional sports.

WHY SHE’S EXCITED TO JOIN THE JURY
“Biking is an important part of our culture in Portland and it is nice to be able to honor that culture in a way that intersects with my interest in film.”