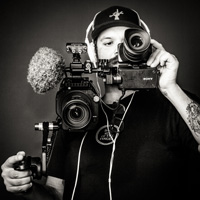 Manny says he has been in love with filmmaking and storytelling since I was a child watching Star Trek reruns in rural Oklahoma. “You could turn on the TV, and you would transported to a world unlike your own.”

“When I come up with an idea or find an interesting subject for a documentary, that’s what gets my engine cranking! Just last year, I was standing in the middle of the jungle of a Filipino village, 105 degrees and dripping with sweat. With my camera in my hand, I thought to myself, ‘This is what it’s all about.'”

Though Manny is a bike racer and frequent rider these days, it wasn’t always that way. In 2009 he was sent on assignment to document the Tour de France. Intently watching the racers through his lens, he grew to appreciate, and eventually fall in love with, the sport.

WHY HE’S EXCITED TO JOIN THE JURY
“Having one of my films screened at Filmed by Bike was one of the most enjoyable festival experiences I’ve ever had. To be able to help choose what movies come to the screen, is a great honor!”