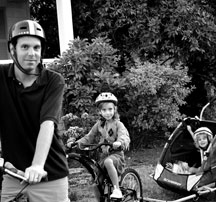 ” Wow, I feel like Barack Obama when he won the Noble Peace prize: “I’m humbled.” To me, it’s the SAME THING.”

Mike’s 2009 Filmed by Bike submission “Claire Rides a Bike” was a crowd favorite, featuring a woman who left her deadbeat boyfriend by loading up a cargo bike with all of her possessions and riding away with ease.

As an active filmmaker, Mike says he knows firsthand the agony and exhilaration of going through the submission process. As a jury member, he’s looking forward to helping find the movies that capture the spirit of Filmed by Bike. “Probably what I love most about Filmed by Bike is the audience; their love of bikes comes through in the form of cheers, whistles, laughing, clapping, people blurting things out. It’s a totally unique movie viewing experience.”