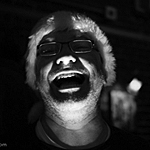 Paul is an award-winning filmmaker who finds jury duty to be a good way to contribute to Filmed by Bike instead of merely heckling during the show.

He says he loves that bikes keep him from looking foolish in the middle of the street. He thinks film is the best reason to sit in a large dark room with strangers. “Just keep your hands to yourself, mostly,” he says.