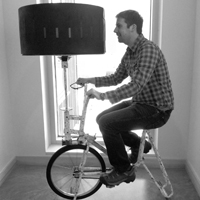 Animator and Co-Owner of Solmate Socks

We know Randy’s going to be a fun addition to the Filmed by Bike jury as his company specializes in mis-matched socks with funky patterns and bright colors.

For many years Randy worked in animation in Portland. Last Halloween, he and his five-year-old daughter created a rear projected shadow puppet theater on the front window of his house.

WHY HE’S EXCITED TO BE ON THE JURY
Randy says he’s excited to be on the Filmed by Bike jury for the free snacks, but that’s not all: “I love attending the festival as an audience member so being on the jury is like watching the Criterion version of the festival. Every film submitted has something interesting to see even if it doesn’t make the final cut”.