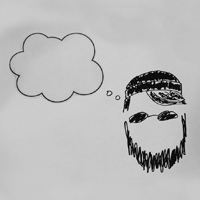 Aaron’s podcast covers simple living, transit and bikes and in his free time Aaron says he packs in as much bike shenanigans as his schedule will allow.

In 2016 Aaron will be exploring new horizons, a journey he says he’s really looking forward to. He wouldn’t mind it if his job title were Secretary of Tomfoolery.

WHY HE’S EXCITED TO BE ON THE JURY
“I’ve been a Filmed by Bike fan since I moved to Portland. I never thought I’d be let ‘behind the curtain,’ so to speak. It is quite a privilege.”