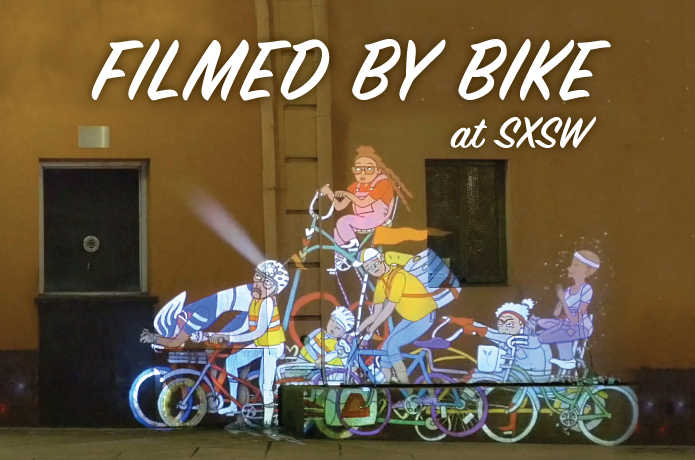 We believe in bike culture.

That’s why we’re excited to head to SXSW in Austin this March and share a little bike culture with 72,000 people. Special thanks to our hosts at Streamline Cycles, Austin’s best bike rental.

Free, open to all, no SXSW pass required.

Filmed by Bike is an arts + culture event focused around a film festival featuring the world’s best bike movies. Every May in our hometown of Portland, Oregon we host an expansive film festival weekend. Our movies collections travel the world year round with more than 50 tour stops planned for this year.

We love getting people excited about bikes in a creative way.

Filmed by Bike is 16 years old, and we have a long history of being a creative force here in our hometown of Portland, Oregon. Now it’s time to bring a bit of the show on the road at our SXSW Popup event. We are huge fans of the creative spirit of bike-loving Austin.

This is a huge opportunity. That’s why we carefully assembled a small team of the best people possible. Everyone on our team knows how to work hard and is eager to spread a love of bikes with infectious and authentic positivity.

LINDA WATTS
President of Sorella Forte, Filmed by Bike Board Member, bike mechanic, badass on a bike, crew support for Race Across Oregon.

This project was generously funded by more than 70 people who believe in what we’re doing! We raised nearly $5,000 in 19 wild and crazy whirlwind days.

If you would like to contribute to the campaign, please Paypal to Info@FilmedByBike.org (using the send money option) or contact us. THANK YOU!