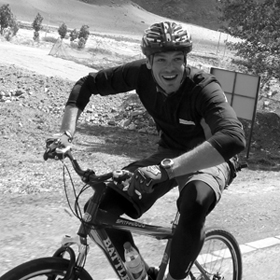 Larz is an adventurer who loves to explore by bike. “One of my most memorable adventures was biking from Lhasa, Tibet to Kathmandu, Nepal with good friends so I’m super excited to be on the jury of a local film festival that’s all about bikes!”

WHAT HE DID LAST YEAR
Larz is pretty proud of the fact that he managed to make it through year one of fatherhood.

OF NOTE
Larz and Adventures without Limits are the local hosts for the Banff Mountain Film Festival, Radical Reels Tour and the 5Point Film Festival’s On the Road series.