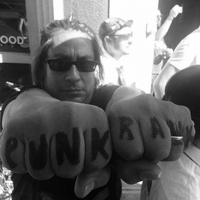 Basically, by day Armando is a fixer, but by all other times he’s a master of bike fun. In 2015, he participated in a wealth of Pedalpalooza rides, was on a Bike Scout Scavenger Hunt team, competed in Cranksgiving and attended an abundance of bike events. Through all of this, Armando, who has lived in Portland since the 90s, says he loves that 2015 was such a year for making more bike friends.

Armando is a member of the Bicycle Transportation Alliance and the Northwest Trail Alliance. He is a firm believer that advocacy is an important tool for making positive change a reality.

WHY HE’S EXCITED TO BE ON THE JURY
“I love that Filmed by Bike is growing and growing. I’ve always loved film and studied cinema and photography in college. Bikes have been a big part of my life since I could ride, so being selected as a juror brings these worlds and passions together.”