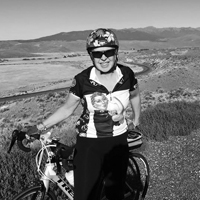 Miriam got her start in film obsession by sitting in on her ex-husband’s film studies classes in Mexico. She says that this resulted in befriending a Mexican movie critic and learning a lot from him.

Miriam also worked for the Mexican government in a film censorship role where she was afforded the rare opportunity to watch an abundance of uncut foreign films.

WHY SHE’S EXCITED TO BE ON THE JURY
“I LOVE watching movies, especially shorts and if they were made by creative people, even better.”