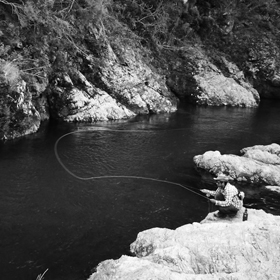 Russ says he has been a big fan of Filmed by Bike since he heard about it years ago “and it’s a great honor to be on the jury. The level of sophistication with bike films has increased over the years, so it will be fascinating to see the best of the best. Also, bourbon.”

HOW HE SPENT LAST YEAR
“Our company did a week long photoshoot with Ortlieb. The days were long and challenging and it took a lot of logistics and planning to pull off. We shot in Portland, the Columbia Gorge, the Deschutes River Trail and on the Oregon Coast. We got up before the sun rose and didn’t stop until it set, so it took a lot of stamina. At the end of the whirlwind week we produced some great images for them.”

OF NOTE
Russ is a pretty avid fly fisherman. He learned how to fish in the middle of a three-year-long bicycle tour and says he hasn’t put the rod down since. If you’re looking for a biking fishing buddy, Russ is your man.