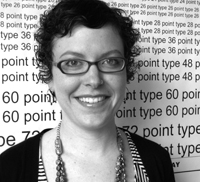 Sarah has been a fan of Filmed by Bike since she first moved to Portland four years ago. She looks forward to putting her knowledge of the festival to good work in selecting the very best movies for the 10th Anniversary Filmed by Bike.

“I love the bike community in Portland,” she says. As for film, this former film student says, “I love the thought of being in a theater and sharing the same experience with a room full of strangers.”