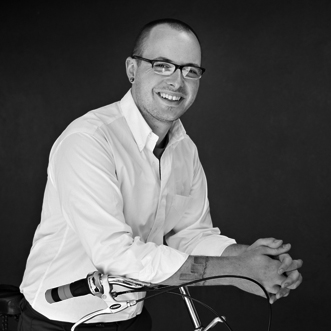 Photography and short films have played a big role in Will’s adult life, moving him from simply getting around on a bicycle to falling in love with the beautiful simplicity of riding. “Every time I’ve attended Filmed By Bike I’ve been impressed by the films. I’m honored and excited by the challenge to help curate a collection of films to inspire everyone who come out for Filmed By Bike in 2014,” he says.

Who Knew? “I’m really proud to have grown up in Eugene. I don’t get to talk about my love of that city nearly often enough. It’s one of my favorite places to ride a bike of anywhere I’ve ridden in North America. The trail network around the Willamette River, the connectivity around the University of Oregon, and recent improvements around the Eugene/Springfield border are all interesting examples of how a city can make bicycling a pleasant and practical option for getting around.”

Favorite Food Cart: DV Vegetarian on SW 3rd “Their Philly Cheesesteak is my Everest. One day I will conquer an entire one in a single sitting…maybe.”