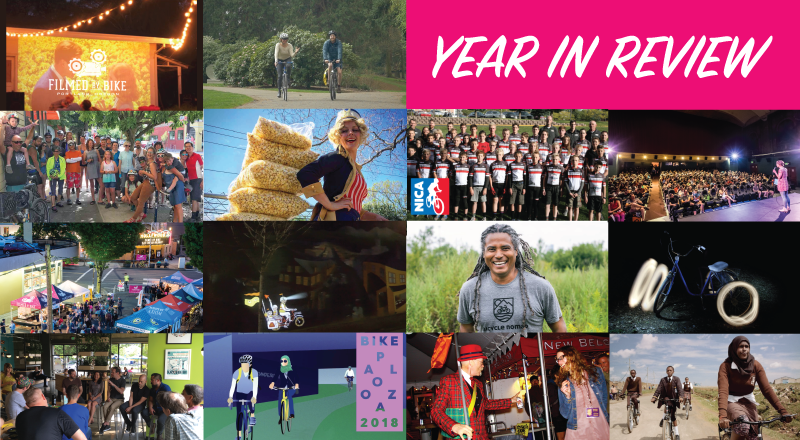 Oh my what a busy year!

We had not originally intended to write a year in review post, but in thinking back on what 2018 was like for us, it’s really hard not to.

This was an incredible year for Filmed by Bike! We packed in a lot, launched new projects, dove into adventure and re-aligned ourselves with our core focus: creating bike community through experiences. 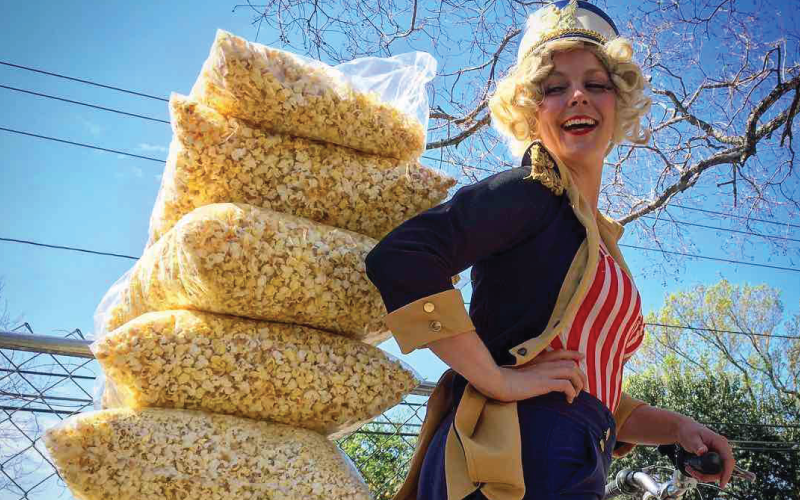 We kicked off the year with a BANG! We were offered the opportunity to set up a pop-up Filmed by Bike event at SXSW in Austin to share bike culture with the hoards of people from all over the world that descend upon this incredible event. Thanks to our community of crowdfunders, in just three short months we planned, crowdfunded and executed this project while simultaneously fielding film submissions and getting our Portland festival up and running.

We were able to send a team of four volunteers on this wild ride. We connected with the Austin bike community, fed popcorn and beer to the hardworking pedicab drivers, connected with our longtime creative bike culture crush: Austin Bike Zoo and projected bike movies on the Austin Convention Center. 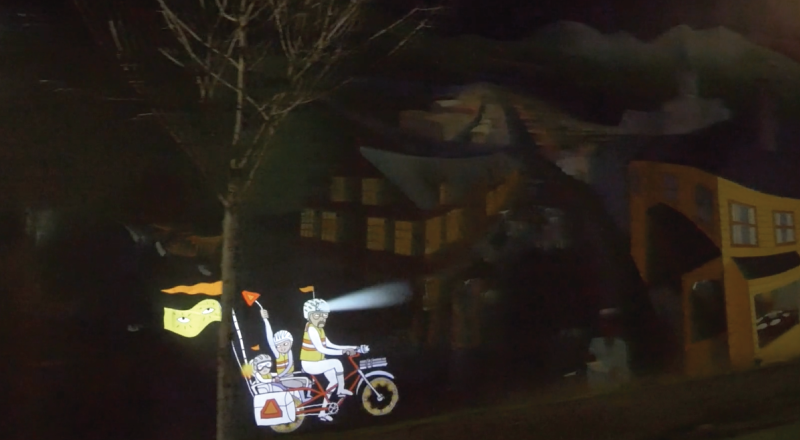 Portland Winter Lights Festival a magical wintertime experience with outdoor displays of creativity that light up the night. As longtime fans of this magical event, we were so honored to be asked to create our own installation along the bike superhighway of North Williams. Special thanks to our friends at NW Documentary for hosting us in their parking lot. 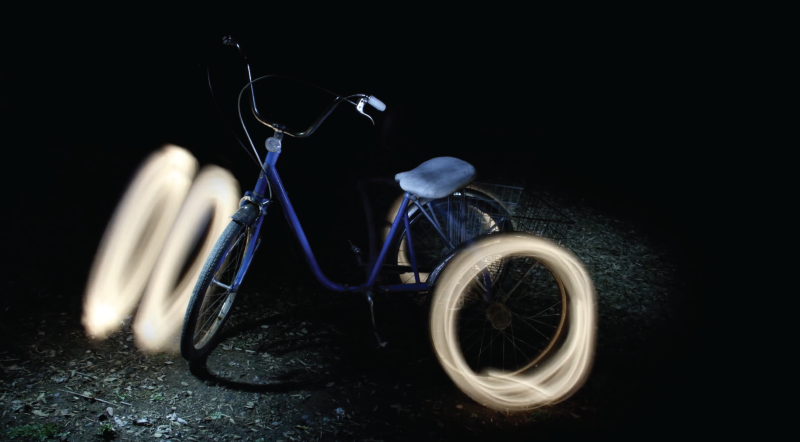 We launched this new event in 2018 and it was so much fun. We loved hearing from filmmaker Lars C. Larsen about his creative process for producing the 2018 Festival Trailer.

Special thanks to our friends at NW Documentary for offering us their cool theater space. The event was packed and we can’t wait to do it again next year. 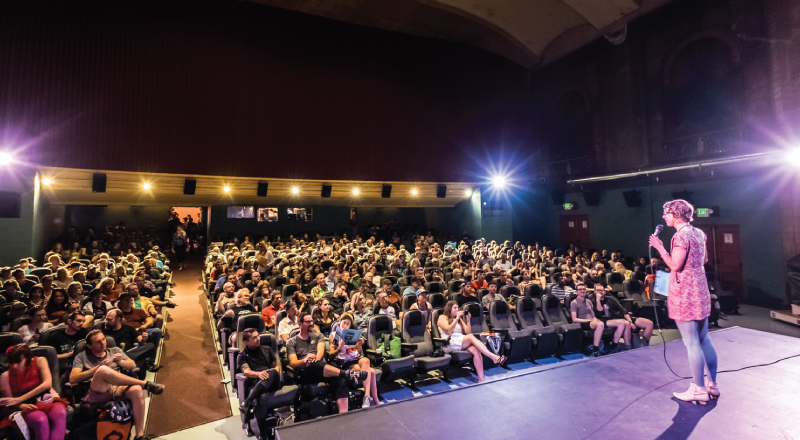 We expanded our Festival Pass Program with the support of our sponsor, Events by Axiom. We launched a new ticketing platform that made it fun and easy for passholders to book events all weekend long. 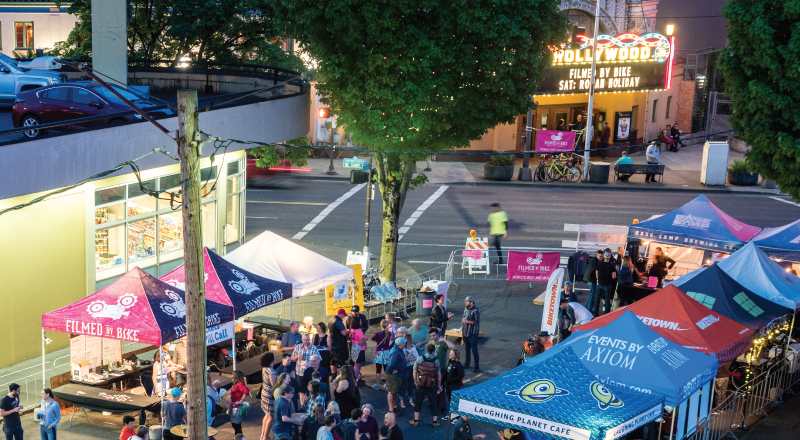 We hosted a street party in front of the Hollywood Theatre with the gorgeous historic marquee as our backdrop. It was a magical night in Portland. 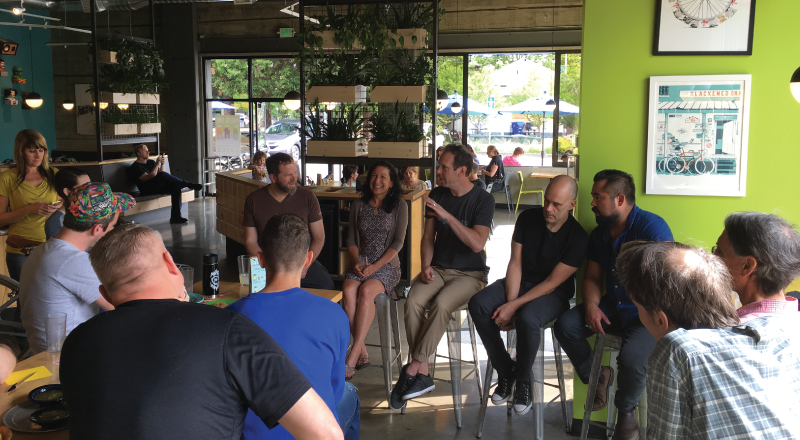 Thanks to our friends at Laughing Planet, we hosted an afternoon Filmmaker Chat with filmmakers from all over the world, including Argentina. Filmed by Bike Board Member and filmmaker Mike Vogel facilitated an excellent conversation with filmmakers that was also broadcast on Instagram Live. We look forward to continuing this vibrant event at next year’s festival. 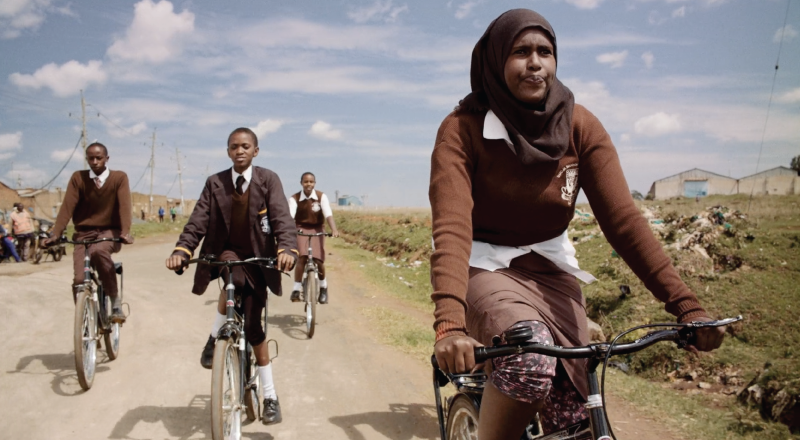 Filmed by Bike founder Ayleen Crotty is from Chicago, and it was her dream to someday have a huge show in Chicago, a party for the Chicago bike community. This year it finally happened thanks to host Tom Renaud as a fundraiser for World Bicycle Relief.

Filmed by Bike Chicago featured an awesome night of movies, a street party, food trucks, a huge raffle and a fun after party at the ultra cool Heritage Bicycles. 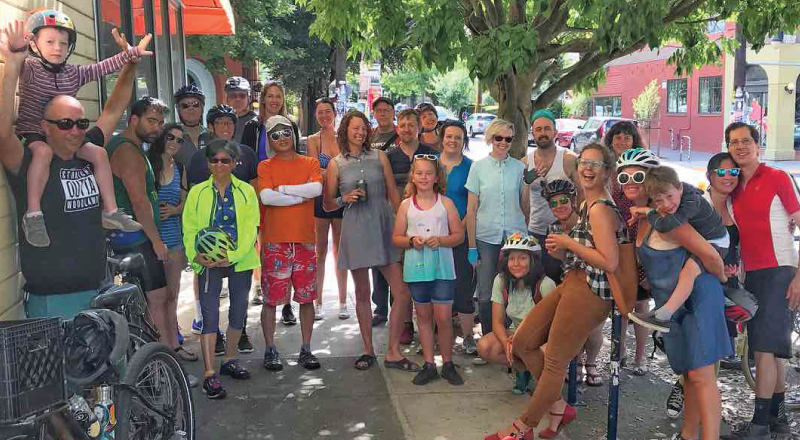 In partnership with our friends at Bike Portland and ORbike.com, we launched Welcome to (Bike) Portland, a social club for people who like bikes. 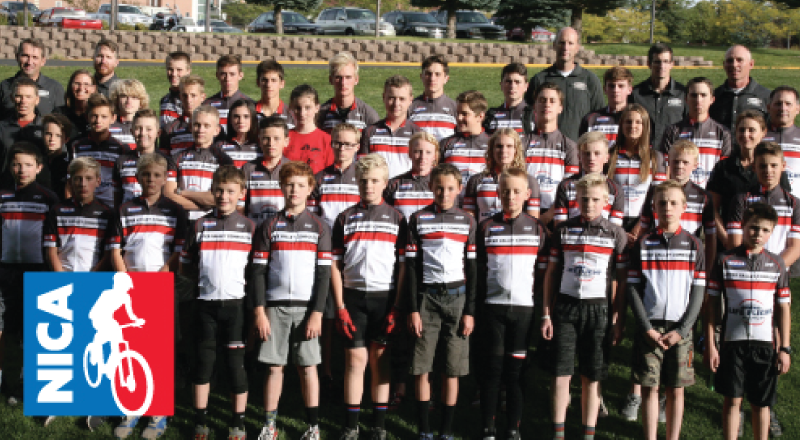 Thanks to support from Splendid Cycles, we launched a new program to support the teams and leagues of the National Interscholastic Cycling Association. This exciting program just recently kicked off and we can’t wait to see it blossom in 2019 and beyond. 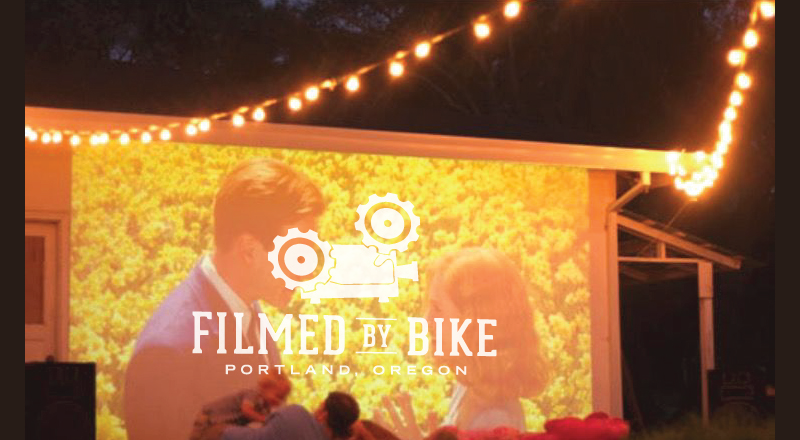 For one very special night in September, an intimate audience joined us for a backyard screening of carefully selected Filmed by Bike films and a talk with bike adventurer David Barstow Robinson. We very much look forward to hosting future Backyard Collections! 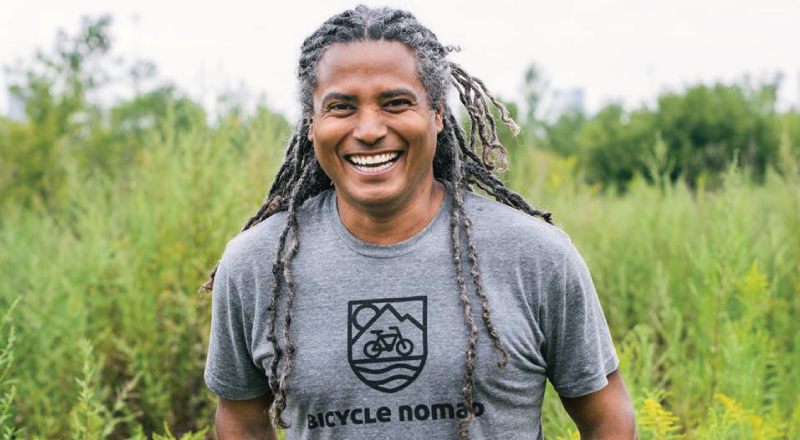 We launched a new series of Instagram Live monthly interviews with people around the world who are building bike culture in creative, fun ways. 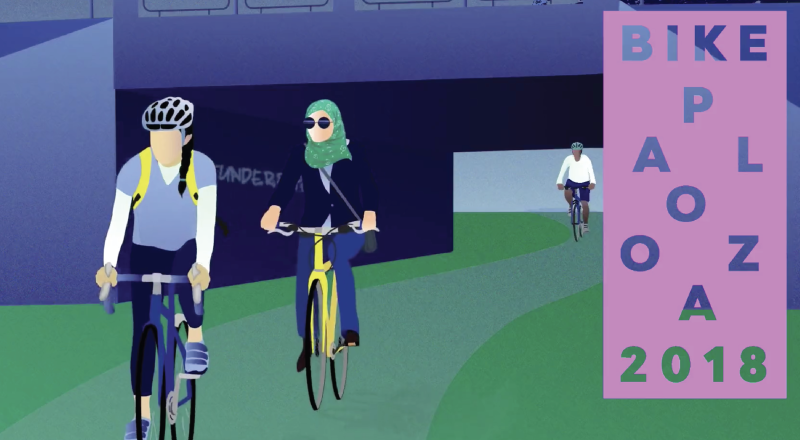 Filmed by Bike On Tour

Our Tour Program continues to grow, with cities like Bendigo, Australia proudly weaving Filmed by Bike into their burgeoning bike movement every year and new (exciting) cities popping up like Missoula, Montana and Copenhagen. Contact us to book a show where you live + ride! 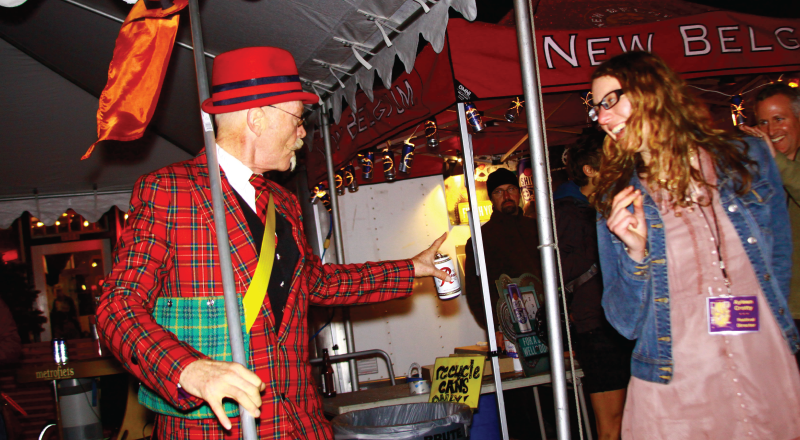 Saying Goodbye to the Street Party

When Filmed by Bike first started, the Street Party was a natural extension of the huge crowds that formed outside the theater, waiting to get tickets. The City of Portland first suggested we host a street party, and the rest is history. And now the Street Party is history.

With last year’s bombastic event as our pinnacle, we now bid farewell to the complex event and close that chapter of our festival. We are excited to spend our time focusing on what we do best, strengthening our relationships with filmmakers and curating the best films possible. 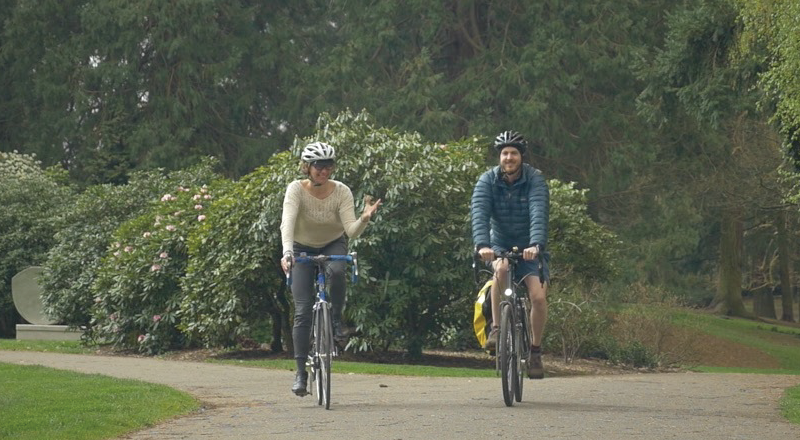 So That Was Our Year!

We are a team of two – Director Ayleen Crotty and Films Manager Guthrie Straw – and we did all of that on top of our day jobs with the support of our 2018 Seasonal Festival Assistant Abby Thompson (you’re amazing, Abby!).

Filmed by Bike is a labor of love love love and would not be possible without the guidance of our Board of Directors, advisors like Meghan Sinnott (Cultural Advisor), the many volunteers who share their time and talents and our sponsors and partners.

Here’s to many more miles and an incredible 17th Annual Festival to come May 17-19 (tickets go on sale March 1).