Filmed by Bike features the best bike movies from around the world. Tonight is broken into two amazing programs that showcase an inspiring mix of fun-loving bike stories. From documentaries to animated shorts, sink into your theater seat as lose yourself in the creative world of bikes.

Both programs are unique and only play tonight – we recommend you see them both. 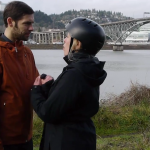 The Spokesman | 13:55
Dean Saffron – Brisbane, Australia
James is a very enigmatic man who has taken it upon himself to collect one bicycle from each developmental epoch for future generations to enjoy.

Ingerucker: Beyond Fingerdome | 6:42
Manny Marquez – Hood River, Oregon
Watch mt. bike racers fight for their right to finish the annual Ingerucker race in a world without gasoline, where bicycles are the only means of transportation.

Off the Grid | 5:31
Lucas Brunelle x Cinelli Bicycles Milano – Milano, Italy
Lucas Brunelle and Chas Christiansen cross the incredible Darien Gap between Colombia and Panama, the most secluded jungle on the earth where the Pan-American road stops.

Dueling Saddles | 2:42
Dan Fleming and Andy Kallstrom – Vancouver, Canada
After a traumatic misunderstanding, a man chases a bandit across town to reclaim what is rightfully his.

Havana Bikes | 5:20
Diego Vivanco and Ian Clark of Kauri Multimedia – Zaragoza, Spain
Cuba underwent a bicycle revolution during its five year ‘Special Period’ in the 90s. Oil was scarce and bicycles where introduced as an alternative mode of transport. Thousands of Cubans used bicycles on a regular basis, as pedalling became the norm on the island. Years later, the transportation crisis subsided and motorised vehicles returned, and the country’s bicycle culture took a hit. Now, new bikes are difficult to come by and parts are not readily available, yet many Cubans still use bicycles daily and, despite the limited resources, a handful of mechanics provide a service to those who rely on their bikes in their everyday lives.

A Fine Balance | 4:27
Tim Askew of Beard Askew Productions – London, Great Britain
A portrait of the UK’s only extreme unicycling display team, Voodoo Unicycles shot entirely on the empty streets of Edinburgh in the early hours of the morning.

Tandem Bikes Are Worse Than Ikea | 4:00
Mike Vogel – Portland
A happy couple decides to enjoy the afternoon by going for a ride on a tandem bike. Veteran Filmed by Bike filmmaker Mike Vogel returns with another of his hilarious shorts crafted specifically for the Filmed by Bike audience.